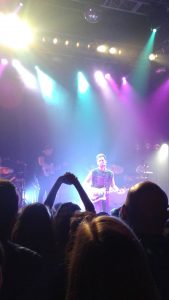 With lights dim low, the underlying bass purring, and the red moon cascading on the blank stage curtains, the atmosphere was a mixture of angst and excitement.

On Saturday, Nov. 18, Bleachers led a sold-out show at 9:30 Club – one of the last stops of the raved Gone Now tour. Bleachers, fronted by New-Jersey based singer-songwriter Jack Antonoff, did little to disappoint. His cheerful tracklist and awkwardly infectious song breaks made for an honest and appealing concert.

The Fun. guitarist and Steel Train vocalist opened with “Dream of Mickey Mantle”, the introductory song to his most recent album, Gone Now (2017). With lights dim low, the underlying bass purring, and the red moon cascading on the blank stage curtains, the atmosphere was a mixture of angst and excitement. When the reverbed drumbeat hit, it matched the queue of the lights – and there he was. In an instant, Jack Antonoff was front and center, flaunting his bejeweled military-esque outfit – timely and the right way to set the mood.

It was completely surreal. Jack Antonoff, the songwriter behind singles of Taylor Swift’s Reputation (2017) and 1989 (2014), along with Lorde’s Melodrama (2017), made a huge impression on the audience. Acknowledging his discography and being in the presence of a mastermind was an experience within itself. His lyricism and musical arrangements were known anecdotes that made the concert unlike any other.

Of course, Antonoff used passed hits to get everyone feeling universally nostalgic. He played a cover of Tom Petty & The Heartbreakers’ “American Girl“, followed with a slower rendition of Fun.’s “Carry On“.

At one point, he spoke harshly yet comically about Chris Christie’s beach antics – alluding to Christie’s actions as risqué and a rather low representation of New Jersey’s populous.

With a mix of Bleachers’ songs both old and new – it continued to keep the energy lingering. Though there was no encore, the send-off was memorable – Bleachers ended the show with “I Wanna Get Better” and “Don’t Take The Money”.

Also, let’s mention that Antonoff took time to introduce the other bandmates – the two drum soloists, the bassist, and saxophonist. Their solos were insane! With Antonoff on the guitar, him and the saxophonist had a battle in a sense, where he would follow Antonoff’s lead. The fact that he could match those guitar chords, and go an extra step, left fangoers amazed.

Overall, the concert was a grand hit. Jack Antonoff took matters into his own hands and created a show that was built around the root of the cause, the music itself.