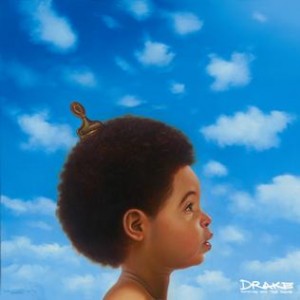 Drake, accompanied by the fantastic production of 40, his best friend and producer, weaves together upbeat, firy tracks with his signature sing/rap slower mood songs. The first two, “Tuscan Leather” and “Furthest Thing“, are virtually perfect, with the latter divided almost into two separate tracks and sounds. Then, after the previously-released single “Started From the Bottom“, Drake hits a mood that separates him from the hip-hop of late. What makes Drake great is not the fact that he can sing, something even crazy Kanye does from time to time, but that he makes you think. This is not music you bump in the car with your friends on the way to a party, these are tracks you absorb with your hoodie on and headphones snug. “Own It“, “From Time“, and “Connect” all fall into this category. They all just make you want to get into your car at 2 AM and just drive. The rest of the album fills out nicely, including a fun cameo by Jay-Z on Pound Cake/Paris Morton Music. But besides the 2 Chainz and Big Sean feature on the final track “All Me“, the rest of album is exactly that: All Drake.

No real hooks, few feature artists, and yet this album works. It’s not Jay-Z, it’s not Kendrick, it’s definitely not Kanye, it’s uniquely and utterly Drake. For some that may be a bad thing, but for many it will be just the album that gives a jolt to the game. I am hesitant to describe this album as perfect because it’s not. The whining is there, the self-pimping is there, all the usual crutches of a hip-hop icon. But all in all this is a fantastic piece of work, the best of Drake’s to this point. In an era where some of the icons will slowly disappear, including Jay-Z, Kanye, and Eminem, Drake could easily take the crown once it’s all said and done. Nothing Was the Same shows the evolution of a hip-hop artist just starting to hit his stride.