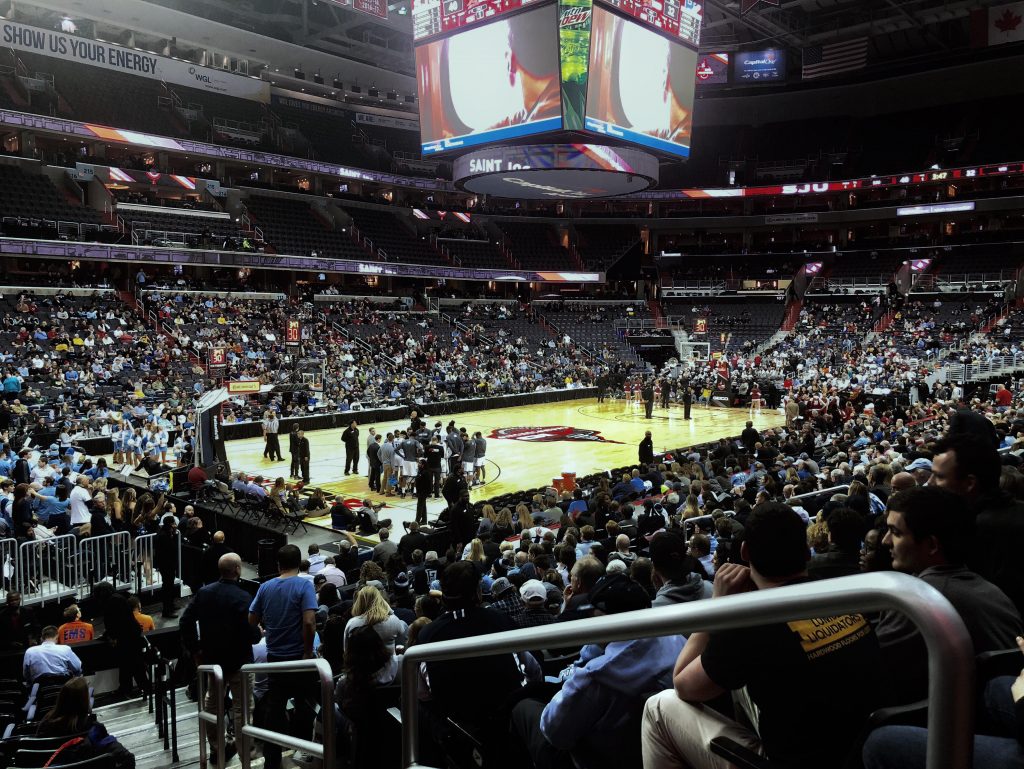 WASHINGTON D.C. — As A10 Tournament action continues, No. 1 University of Rhode Island (URI) faced off and won by a score of 90-87 today against No. 4 St. Joseph’s University (SJU) for a chance to play in the championship game on Sunday at 1:00pm at Capital One Arena.  It was a rematch of the game from February 27, 2018 where SJU pummeled URI by a score of 78-48.

Rhode Island (25-6) advanced to here by beating VCU, 76-67 on Friday in the quarterfinal matchup. The Rams won the regular season title this season and are looking to back that up by finishing what they started and winning three straight in D.C.

The only thing standing in their way now is No. 3 Davidson and their shooting machines Peyton Aldridge (24) and Kelley Grady (23), who scored 47 of the 82 points in tonight’s win over St. Bonaventure. The defending national champion, Rhode Island, will have to find a way to contain Davidson’s three-point shooters in order to secure a win in the A10 Finals tomorrow. However, with a win tomorrow, Rhode Island will secure their 91st win, the most ever in a four-year span for their program.

Highlights of URI vs SJU

During the first 10:00 minutes of the first half, SJU held a strong 8-point lead over URI. For the next couple minutes, URI was struggling to make open shots and was unable to come up with any offensive rebounds. With 43 seconds left in the half, URI cut the lead to only 4 points after free throw from Nicola Akele. SJU took a 47-40 lead to the locker room after the first half.

Coming out of the break, SJU’s lead was up to 11 points over URI. However, with less than 10 minutes to go, URI cut the lead to 3 and the comeback was on.  With just over 6 minutes to go URI gains the lead with a score of 72-71. URI is now back in their rhythm and are making 3’s and grabbing offensive rebounds. SJU inbounded the ball with a score of 87-90 with 3.2 seconds left and made it to half court before traveling and turning the ball over. URI sealed the game by running out the clock.

Stats from Davidson vs. St. Bonaventure

Davidson (20-11). will play in its first ever championship game in the A10 on Sunday. However, tonight they snapped the Bonnies’ 13-game win streak, shot 55% on three pointers, and 56% in overall field goals. If they want to win on Sunday, they will have to continue this pressure against Rhode Island. Davidson recorded 25 total rebounds, 23 assists and only 5 turnovers.

On the other hand, No. 2 St. Bonaventure, now eliminated, recorded 23% on three pointers and went under 50% for overall field goals (45%). The Bonnies’ struggled from the charity stripe with a free throw percentage of 53. St. Bonaventure finished the game with 34 total rebounds, 16 assists, and only 6 turnovers. We’ll have to see if they receive a bid for the NCAA tournament.

Players to watch for Sunday’s Game

Keep an eye out for Peyton Aldridge and Kelley Grady, but also for Rusty Reigel as he had 10 points, went 75% for field goals, 2-3 on three’s, and a perfect 2-2 on free throws. He also had 4 rebounds, 8 assists, with only 1 personal foul.

Andre Berry, their center, finished the night with 18 points and 9 rebounds, definitely someone to watch next game. However, let’s not forget about Jeff Dowtin, E.C. Matthews, Jared Terrell, or Fatts Russell, as they all had 10+ points, together collected 19 rebounds, 14 assists, while only combining for only 3 turnovers.

Based on Rhode Island’s poor start today and how Davidson was relentless on dropping three-point baskets, I predict a first-time championship win for the Davidson Wildcats with a score of 71-64.