It’s hard to think of a 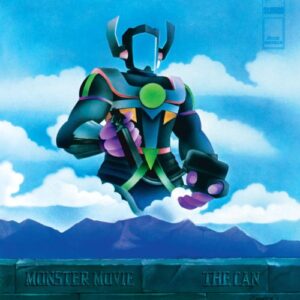 more influential band that hasn’t gotten their fair dues than Can. They were one of the forerunners of the late 60s-early 70s German experimental rock scene which led to the development of the genre known as “krautrock.” This genre was known for a lot of influences, such as 60s psychedelic rock, early punk and electronic, as well as avant-garde inspirations like minimalist and noise music. The groups that came out of this scene, especially Can, were influential on a wide variety of genres and bands themselves, such as Joy Division, Stereolab, and Radiohead.

I chose to write about Can’s debut album, Monster Movie, as it was my introduction to the band, and it showed a lot of the group’s influences and immense potential that would be fulfilled with their following albums. It only has four songs, so it makes sense to discuss them chronologically.

The album opens with its best track (and one of my favorite songs from the band), “Father Cannot Yell.” It opens strong and never lets up during its 7-minute runtime. Each band member is firing on all cylinders here, with killer guitar work from Michael Karoli and Irmin Schmidt’s keyboards. Part of the fun of Can’s early work is that it’s made noticeably clear that every song was built out of a long improvisational jam, like how the album’s 20-minute closer “You Doo Right” was built out of a 6-hour jam session. Every song here, especially the opener, is loose, free, and ready to explode or go in a million different directions. However, a lot of people claim that this track is too much like “European Son” from The Velvet Underground’s debut album. There’s a lot of truth to this, and it makes sense as Can was very influenced by the Velvets during their earlier years. But I think these claims can be dismissed as “Father Cannot Yell” is made to seem completer and more well-formed as a song, allowing it to build and expand on its influences as opposed to only imitating them. I love European Son, but it’s a messy improvisation that many of Can’s early songs could’ve been.

The second song is called “Mary, Mary So Contrary” and its great despite feeling like a cliched 60s slow-burn psychedelic rock at points. Though this is forgivable as the band were still finding their sound and style. An issue that many have with this album is Malcolm Mooney’s vocals and the band’s lyrics, which are untraditional and awkward at times. I like Mooney’s performances and the writing, but they’re more there to support the songs and their structure as opposed to being a focal point of a track. For example, Mooney’s vocals get swept under the loud guitars during “Father Cannot Yell” and this doesn’t feel accidental. Can never seemed to really give much thought to the lyrics in their songs as they would tend to be inspired by poetry (such as on the second track), related to short stories, or be seemingly improvised. Criticizing the band for their lyrics is missing the point of their work.

Malcolm Mooney’s vocals are offbeat, but they work when paired with a fuzzy art rock sound like Can’s music. And his performances can be especially energetic and fun, like on the third song “Outside My Door,” which has him practically screaming as the song goes further along. It’s incredibly fun and a highlight on the album.

The final track here is called “You Doo Right” and despite being a fan-favorite, it’s the track on the album that has the most issues. As mentioned, it was built out of a 6-hour long band jam session and then condensed into a 20-minute song. It’s obvious to bash a song like this for being too long, but Can would become much better at handling lengthy songs like this in subsequent albums, such as the tracks Mother Sky, Bel Air, and Halleluhwah. The song suffers from a lot of poor pacing and can feel meandering, with Jaki Liebezeit’s (albeit, incredible) drumming carrying the song for long stretches. Still though, the track is great during certain moments. Mooney’s vocal performances are great here, and it foreshadows some of the band’s later work with tribal drums and drone rhythms. I just wish it could’ve a tighter track could have formed from their improvisations.

While having its problems and at times it can be too close to its influences, Monster Movie is a great debut for Can, and it paved the way for even better, weirder, and more influential albums from one of the unsung revolutionary bands of rock music.